In March of 2017, Greenfield City Parks and Recreation Superintendent Ellen Kuker, Hancock County Arts Coalition member Steve Vail and professional artist Chris Sickels made a fascinating proposal to our art program at New Palestine High School. Could we create a large ceramic grid portrait mural, designed by Chris's 13 year old son Owen, of Indiana WWl hero Harvey Weir Cook. Weir Cook was born in nearby Wilkinson, Indiana in 1892 and was an American aviation pioneer. Indianapolis International Airport's terminal building is named after Weir Cook. I thought for a split second, "Yes! We can create a separate work space in the art room and include this project as an activity option for students in our TAB art program." The project would require the creation of 1247 2 inch ceramic tiles  the twisting of 2494 three inch wires. The portrait tiles would be tethered to a 7.5 foot by 5 foot steel mesh grid, so the presentation of the image would be pixelated similar to a Chuck Close portrait. It would be our honor to honor Harvey Weir Cook, a legend in American aviation history.

Once the steel frame and grid was delivered to our room we began to experiment with the construction of the clay tiles. Considering the work would be exhibited outside, we consulted with Amaco-Brent Ceramics company for the best clay and glazes to use. They recommended White Clay
#25 and Teachers Palette Glazes.

I created portable menus for the project and a white board diagram for students to examine. I explained the project to our students. Their participation would provide them with an opportunity to be a part of something very special! Most of my students were involved in their own projects, but several seized on this opportunity and enthusiastically began producing clay squares. Unfortunately, a quality control problem soon became apparent. The tiles had to be perfect one and three quarter inch squares and a quarter inch thick. Not all of the tiles produced could be used for the mural. Some of the children, either because they lacked manual dexterity, focus or patience, were not able to execute with precision the square tiles that were required. More practice would be needed or a new method would need to be explored. We came up with a new method. 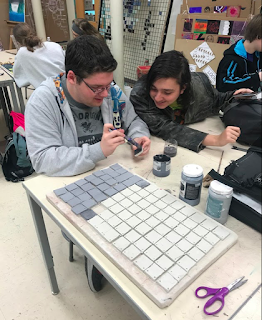 The tiles would be rolled out into a large slab, trimmed, measured and re-cut into uniform tiles that would be perforated then glazed.

Working with larger batches of tiles became much more tenable. We loaded the kiln with glazed tiles in addition to our regular output of ceramic projects over the course of the project and fired our kiln up! Most of the time, we were happy with the results! 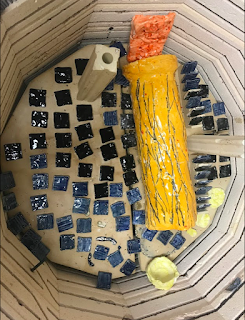 The kiln was fired to a temperature of 1800 degrees. Temperatures lower than 1800 degrees did not produce a finished glaze quality to out satisfaction. Our kiln got quite a work out!

Finding the correct position on the grid and selecting the right color for the grid position and the tile was a complex mental task that several of the children enjoyed doing. It only had to be done 1247 times. Twisting two wires to attach each tile required hand strength and dexterity that may of the children did not have so I did some recruiting.

We set the work carefully into the trailer, strapped it in for safe passage and waved goodbye!
The work now rests in downtown Greenfield, Indiana mounted on concrete inside the "Living Alley."
Thank you to the City of Greenfield, Hancock County Arts Commission, the students of New Palestine High School, Owen and Chris Sickels and of course, the Family of Harvey Weir Cook! 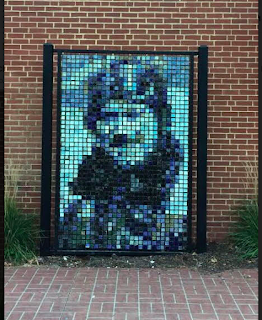 Posted by Clyde Gaw at 11:47 AM
Email ThisBlogThis!Share to TwitterShare to FacebookShare to Pinterest

Awesome Project! I am a native Indiana girl. I used to live in McCordsville, in Hancock County, before moving to central Florida.