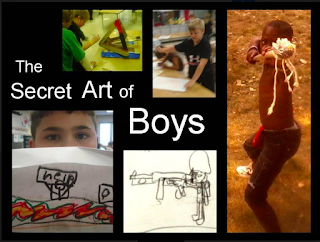 If you believe that human beings have inherited a great deal of their thinking capacities from an ancient genetic lineage as do I, it is not hard to recognize that constructivist forms of thinking, learning and doing begin at birth.  Mediated through our cognitive, sensory and emotional realms, information is then transmitted to our formative minds where we make sense of it. How to make sense of this World?
From a young child's perspective, I believe it is difficult to understand how weapons of power can take life. The taking and ending of life with objects of power is a concept that compels fascination. Thus, for many children seeking understanding of this World, a fascination with weapons technology and fantasy violence can easily take hold of their imagination.

People have been fascinated by objects of power since the beginning of time. Human interest in power and coming to terms with this power through artistic expression is innate. The earliest examples? Prehistoric cave art. Let's take a look inside the Hall of Bulls at Lascaux. It should be noted by the reader that the bulls depicted by the artists of Lascaux are not the same domesticated bovine we recognize from our modern era. The bulls of Lascaux are aurochs. Aurochs were powerful and dangerous animals feared by prehistoric hunters. Skeletal remains reveal creatures with unbelievable power, over six feet at the shoulder, weighing in over 1000 lbs. and with horns over a meter in length. Aurochs dominated the landscape of the European Paleolithic era and dominate the viewing space within the confines of Lascaux.

Like the early artists of Lascaux, children develop a fascination for objects of power and it is not surprising that for many young artists, representations of power dominate their imagination and their art.

Posted by Clyde Gaw at 9:15 AM No comments:
Email ThisBlogThis!Share to TwitterShare to FacebookShare to Pinterest

Thinking About The Creative Process


Posted by Clyde Gaw at 2:29 PM No comments:
Email ThisBlogThis!Share to TwitterShare to FacebookShare to Pinterest

Is The Creativity Organ Innate?