Clark Fralick and I have been collaborating for some time now (1996 to be exact). We have explored, analyzed and conversed on all manner of subjects related to art education including creativity (https://blockspaperscissors.podbean.com).

One of our habits is to "play" around. In the summer of 2016, we were invited to play at Dr. Christopher Nunn's maker space in downtown Indianapolis! Christopher had an amazing maker space/community art studio that included a laser cutter and all kinds of wonderful tools and materials, including cardboard! On the day we visited Christopher, one of his dear friends, Bethany Nold Thomas stopped in to visit. Bethany is the executive director of education programs at the Indiana State Museum! Bethany joined in the creative fun-making and watched Clark and I play with a cardboard marble run that we were working on. We had a marvelous morning of conversation and creative experience!
In August of 2018 Bethany contacted Clark and I. She wanted to know if we would be interested in working inside a cardboard engineering exhibit she and Gail Brown, the ISM's director of Public and Family Engagement were putting together. Our answer? YES!

Clark and I arrived at the ISM in early September. The Cardboard Engineering Exhibit was a fabulous maker space loaded with materials, informational menus, tools, works spaces, ancillary supplies and examples of cardboard engineering! Clark and I would provide the inspiration. We were the artists in residence! 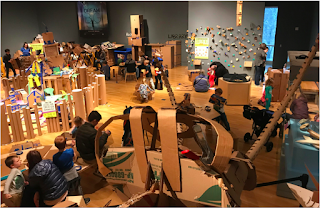 What we observed during our time inside the exhibit was the human capacity for natural creativity, or emergence.  Museum visitors walked into that exhibit cold without preconceived notions of what they might create. After embarking on a creative experience with cardboard, they walked out with fascinating, imaginative sculpture objects!
Our job during the exhibit was to provide inspiration for museum goers. Our first large sculpture was a pichinko game Clark titled, "The Mesmerizer!" 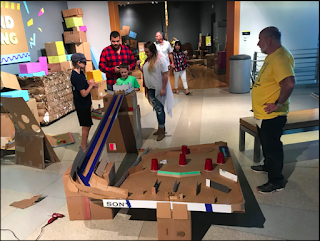 The Mesmerizer was a big hit the day we made it. Lots of folks were passing by to see what we were up to and when it was ready, we encouraged families and their children to give it a try. Ping pong balls powered by gravity would bounce through a maze of obstacles on their way to numbered slots where the player could score points! Folks were mesmerized by the balls bouncing at high speeds inside the labyrinth! The Mesmerizer was a big hit!

There is something about moving orbs, cardboard tracks, engineering and structures. Clark had an idea for a marble run for the exhibit. Not just any marble run, but a monstrosity of a marble run! Clark and I came in one morning in October and we began to build. Over three days we worked on a structure titled, "The Beast!" This creature was 12 feet tall, and had multiple track possibilities. Clark built a "scrambler" that would bounce the marble around different obstacles creating chance entry points for the marbles depending on Newton's laws of gravity. Clark even built a hand powered marble elevator. It was a center point of interest inside the exhibit!
After our work on The Beast, we realized our time at the ISM would soon be over.  By the end of Spring the exhibit would be closing. We had to come up with something new. What could it be?
We had built large cardboard sculptures before including a thirteen foot eagle puppet that was a huge hit at the Lawrence, Indiana 4th of July Parade. What was possible and what would the museum allow us to do? We had some ideas!

Posted by Clyde Gaw at 6:23 AM
Email ThisBlogThis!Share to TwitterShare to FacebookShare to Pinterest